My daughter and I couldn't wait to get to the Saturday matinee showing of the new Michael Moore film, Capitalism: A Love Story. I almost couldn't believe that our Phoenix area movie theatres were brave enough to show this film in the land of Barry Goldwater and John McCain. When we arrived at our local mall multiplex (ironic, I know) my daughter ran ahead to buy the tickets at the box office while I strolled at my comfortable senior citizen's pace, but when she got to the window she was refused a ticket.

"What's the problem?" I asked, rushing up when I saw the look of disappointment on her face.

"Oh, that's OK, she's with me," I told the concerned ticket vendor. I couldn't help but wonder what material in this documentary could possibly have merited an R rating. Michael Moore's films are not known for steamy sex scenes or gratuitous violence. Perhaps the rating board considered it Marxist pornography and they were looking out for the welfare of our impressionable young, soon-to-be voters?

"So, are you going to let her see it?" the woman asked, a somewhat disbelieving tone in her voice.

"Yes, I'm going to see it with her, that's all that needs to happen - right? 'R' means 17 unless accompanied by a parent."

"Well... does she have ID?" Clearly, there was no way I was going to slip an innocent child past this guardian of the ratings, this enforcer of the code, without a battle. A series of circuitous misunderstandings occurred and we had to leap backwards through a row of flaming hoops before we were finally allowed to purchase tickets. After getting the third degree at the box office it came as no surprise to me that the theater was only about 1/4 full and that my daughter was the only teen in that auditorium.

We are unabashed Michael Moore fans in my family: he is our Rocky Balboa, forever taking on the big guys and fighting against the odds. This time, Moore has decided to take on modern Capitalism by explaining the origins of our love affair with an economic system that (at least here in the U.S.) often gets confused with patriotism and democracy, as if the three words were practically synonymous. 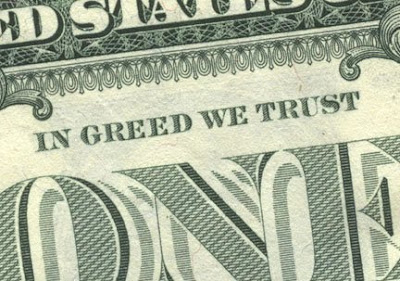 Moore begins his film with a quick review of how Capitalism was intended to work. Free market capitalism was supposed to promote healthy competition which would benefit consumers as much as suppliers. In theory, the suppliers with the best goods, services and prices would thrive and those who did not give the people what they wanted would go under. In the honeymoon phase of America's romance with Capitalism we grew to believe that if we worked hard enough and were clever enough, we could attain riches and social status that other economic systems would not afford us.

As in the case of a bad marriage, Americans started to find out that the partner they thought they had (Capitalism) and the one they really had (Unchecked Greed) are two different things. Moore peels back layer after layer of outrageous practices and Congressional collusion that will have viewers ready to march on Washington and Wall Street. He goes on to expose the morally questionable corporate practice of secretly taking out life insurance policies on employees, thereby allowing the company to profit from the employee's death, a practice colorfully referred to as "Dead Peasants" life insurance. When the employee dies for any reason, the company collects benefits without the knowledge of the employee's family.

The film provides many such examples of unchecked institutionalized greed and chronicles America's increasing disillusionment with Capitalism, or at least the form of Capitalism we've all come to know and no longer love. The "marriage" starts to fall apart when the peasants rise up to take back what rightfully belongs to the people: our government, our homes, our nation. Demonstrations, strikes and the election of President Obama mark the turning point in this marriage. But will "Change" really win the day? We as the audience are left to decide if this marriage will survive. Will Capitalism change to become the mate we Americans fell in love with? Or is this love story over and is it time for something new?

As the credits rolled I clapped and hooted loudly, hoping other people were feeling as fired up as I was but only a couple of people in the sparse audience joined me. That's OK - I can make plenty of noise on my own.
Posted by Alice Bag at 10/04/2009 09:30:00 AM

I noticed that R rating a few days ago too and felt the urge to blog about it myself:

"So Michael Moore's new movie opened this weekend with a strange rating.

I haven't seen it, but check out what it got compared to, say, the new Halloween II:

Capitalism: A Love Story-
Rated R for some language


Keep in mind the MPAA is headed by Joan Graves, a registered Republican.

Bottom line?
ideas that are critical of the status quo are considered more dangerous."

it's funny how your caughter probably would have had a way easier time getting tickets for a grisly horror flick than Capitalism. . .

Is it really a love story amazing??? well i hope its better than 9/11

I want to go see it...thanks for sharing your experience..

Must be California...Kim and I saw it on opening night and we were busy clapping along with many others.

One of the most revealing things to me was FDR's 2nd Bill of Rights and how his people fixed up war-ravaged Europe and Japan. WWII echoes are still being felt today even after so many decades. We won the war, but lost some of what made our country great in the process. The all-consuming consumerism and hedonism of the post-war years in America were a boom time for the nuclear family, but maybe the beginning of the corporation/rampant capitalist monster?

To me, the movie opens much to thought and hopefully dialogue. My father was a staunch conservative (probably why I rebelled so much as a kid) and even though he is no longer around, I can't help but imagine that even he would have changed some of his opinions after seeing the film.

It is easy for detractors to say that Moore is merely spreading propaganda and trying to brainwash people (R rating so he can't brainwash our youth against corporate America???), but is he really? He uses enough evidence to prove his points. All you can do is investigate for yourself...

I wish I could show this to my classes...Our youth need to take back this country from oblivion.

'nuff ranting...the movie has reignited some fires within me...